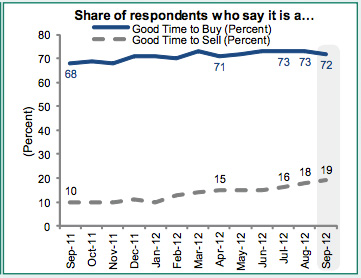 If you have been actively trying to purchase a home in the Boise area lately, you already know that homes that in certain price ranges are in high demand.  Many homes are receiving multiple offers, some higher than asking price, and are going pending in less than 24 hours.  The Boise real estate market correlates very closely with that of Fannie Mae’s September National Housing survey, which shows that Americans at large are feeling positive about the housing market and economy in general.

“Consumers are showing increasing faith…” said Doug Duncan, senior vice president and chief economist of Fannie Mae. “Home price change expectations have remained positive for 11 straight months, and the share expecting home price declines has stabilized at a survey low of only 11 percent. Furthermore, the Federal Reserve’s latest round of quantitative easing has caused a large drop in mortgage rate expectations. Friday’s September jobs report, including the strong upward revisions for prior months, a sizable increase in earnings, and a sharp decline in the unemployment rate, should provide further impetus for improving consumer confidence in the housing market.”

On a grander economic scale, forty-four percent of survey respondents also felt that their personal finances were seeing improvement and seventeen percent reported a significant increase in their household income in the last year. Despite the improvement, however, thirty-four percent of the 1,000 survey participants still reported significant increases in household expenses.

To find out more details and see graphs of the survey results, please click here.  If you would like to hear what these statistics mean for you and your Boise home, please give me a call!